The Cooking with Adrienne Book is Published! 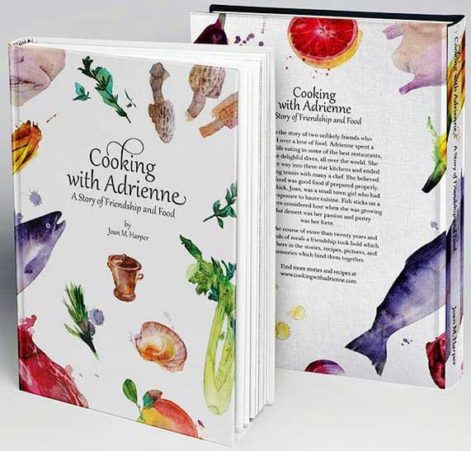 Cooking with Adrienne  in addition to being a cookbook, is also the amazing, often hilarious, story of a woman who became the American doyenne of French cuisine from the Sixties through the Nineties.  Her recipes were based on the food coming out of the kitchens of Alain Chapel, Frédy Girardet, Michel Guérard, Jean and Pierre Troisgros, Roger Verge and others who were creating the New French Cuisine.  She became an accomplished home cook and helped to pave the way for many of these chefs to bring the New Cuisine to America.

Adrienne first began cooking in Paris with Simone (Simca) Beck, co-author, with Julia Child, of Mastering the Art of French Cooking.  See the story Fluting Mushrooms on the Bidet for a good laugh and insight into Adrienne’s single mindedness!

Over the years she became the Queen of Sauces and the book has a strong focus on taking the  mystery out of making a sauce.  From a simple jus to beurre blanc and hollandaise, as well as the basics of stock and vinaigrette, you will have an insider’s guidance to all things sauce related. The recipes run the gamut from Jean Troisgros’ Steak with Spinach and Vinegar dressing, to Adrienne’s own Squab with Morels and Frédy Girardet’s Passion Fruit Soufflé. There are also simpler, but no less delicious, recipes for Tomate Provençal, Pasta with Pesto and Scallops, and Moussaka. They reflect Adrienne’s belief that all food is good food if prepared properly.

The book captures the camaraderie we shared – two unlikely friends, united in their love of cooking and eating the best food possible. I started writing the book when Adrienne developed a rare form of dementia – Frontotemporal Degeneration (FTD)– which robbed her of the ability to cook, speak or write.  Which meant that I would no longer be able to communicate with my cooking mentor and so I began gathering together all of her recipes and stories.

A portion of the proceeds from the sale of the book is being donated to The Association for Frontotemporal Degeneration, (The AFTD), to fund research into finding a cure for FTD and support patients and caregivers.   You can help support The AFTD by making your own donation in Adrienne’s name.

7 thoughts on “The Cooking with Adrienne Book is Published!”